Just the right height to stand and work. Just started Act 3 and can see the end. Really hyped. Also just wrote a short story in the Fairchild universe. Already knew she survived the galactic apocalypse, so put her in a place to be discovered by my favorite salvager: Doyle Iwakuma. BW: The Science Officer was something I wanted to write for years, before I discovered that I could just publish stuff myself and make money. I grow things, and wanted to put that into space. BW: The ability to take the worlds of my novels and spin off little side things about various characters.

Or to create new worlds where I can play. Do you think these types of social interactions are important for writers? BW: Got a monthly lunch group in Seattle where we talk business more than craft. They always fail in rancor, or fall apart in indifference. BW: Vo zu Arlo, probably. He gets his relentlessness from me. His intensity. Hard to nail one. Most of my characters are actually amalgamations of people I know, where I take bits and merge them. BW: Bit stories.

Jessica is 6 novels now, and will be nine. The Science Officer Season One is eight novellas. Season Two will be nine. Everything tends to be serial with me. Do you remember the first story you wrote? Tell us about it. SDR: Oh, all right. How do you manage them?

Better that way. SDR: Are there certain themes that keep coming up in your work? If so, is it intentional, or something that just happens? BW: Yes. Have done extensive outlines. Have sat down and discovered the next sentence as I typed. SDR: Do you think there were early influences as a reader that have guided the stories you create as a writer?


CS Friedman. August — October , moved 17 times. Time zones, three. Zip codes, almost all of them. BW: I am in control of my own career. Someone else is in charge of me making enough money to survive. SDR: Many writers also put their creativity to use in ways other than writing. This is the shameless self-promotion portion of the interview. Going to do a special on the first three books in April as a lead in. Ask it, and tell us your answer. You can pursue Traditional Publishing and see your name in the bookstore, but most of the people I know doing that still have to have day jobs. And there are few people making a living in TradPub anymore.

I retired from a good job as a database architect in February to become a full-time writer, and most people have never heard of me. Making good money, though. SDR: Well, thanks for answering all my questions, Blaze! Linda lives in Northern Virginia, and enjoys writing science fiction, fantasy, and mystery, particularly military sci-fi, drawing on her own background and experiences.

She keeps a website at lindamayeadams. I hope you are, too! SDR: I absolutely love the idea of this story! But the aliens are hostile to humans and they are difficult to communicate with. So a lot of fun playing around with the cool side of science. It had just hit me that Crying Planet was actually a series, so I gravitated straight into a short story with the same character for the call.

The idea was a haunted space station. The bug sensors came into this story first, so I was adding them in the novel. I have to write it to find out. I liked reading science fiction and adventures, and yet, if there was a girl in the story, she was usually wallpaper. The guys always got the adventures, and the girl got to be rescued.

And then I saw Star Trek and Uhura on the bridge in this important and visible role. So I write about characters I want to see, having adventures. LMA: The most challenging thing is discoverability. I want to write full time eventually—have always wanted to—but discoverability is happening at its own speed.

The best thing? Indie really has opened a lot of doors, and places like Bundle Rabbit offer so much exposure. Though I confess that adventures are fiction are sooo much better than real-life ones!

Today on the blog, we have an interview with Michael Jasper, another author featured in the Short Flights bundle. While Hank is the c ut-and-dry fellow who has an unquenchable desire to rescue missing people, Bim is the heavy-set slacker who has a special gift for connecting to people that truly makes Finders, Inc. SDR: Tell us where you like to write; describe your current writing workspace s. MJ: We live in a small log cabin in the North Carolina mountains between the small towns of Boone and Blowing Rock, and my work office and writing office are one and the same: I get exactly half of the loft above our living room and kitchen.

But I usually do most of my fiction writing in my comfy recliner up in the loft, close enough to the window so I can see the outside world right now, a mid-March snow is softly falling out there , but not too close that I get distracted. I think a change of pace is always good for writers, just to shake things up and to keep us from getting into a rut. So I worked on other projects, but I kept coming back to it.

Just recently I figured out what the book was really about, and I am now in the process of finishing it up. I think that it will be one of my favorite creations when all is said and done, just because I struggled so much with it and — more importantly — I learned so much in the process of writing it. MJ: I ended up writing a trio of series by accident, mainly because I kept wondering what those characters were up to lately. My first series, Contagious Magic, ended on a bit of a cliffhanger, so I had no choice but to keep going with book two eventually! I look at a series like a really good premium cable TV series, where you can really dive deep with the characters and show them growing and changing as time passes, even more than you can in a single novel.

You also get to tell bigger and bigger stories. I kind of like the risk if you can call it that of writing by the seat of my pants. Also, the graphic novel I wrote and my artist friend Niki Smith illustrated was recently optioned for the movies, which has motivated me to start work on Book 2 of that series the first book was 9 issues, and almost pages of graphic novel adventure.

Which means I should probably end this interview and get back to my writing. For a long time it was the darkest thing I ever wrote. SDR: I love hearing about where other writers write, so could you describe your current writing workspace? I need lots of sun and fresh air when I make the words. KM: This was actually the rare instance where I used something from a dream. I had recently moved from a heavily populated neighborhood to one at the edge of the suburbs, surrounded by corn fields and dairy farms. In my dream I had the image of a man walking up my dirt road in the light of the full moon and I just knew that there was something wrong with him. 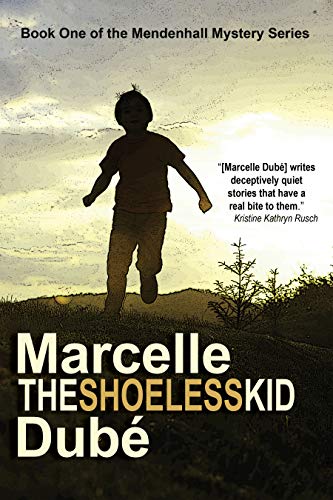 Love, necessity, marketability, or something else? KM: I love short fiction! My reading time is half fiction magazines and anthologies and half novels. I wrote her first book as a standalone but loved her character so much I had to go back and continue her story.

The Scout Shannon books are young adult science fiction and I loved the idea of slowly expanding her awareness of her world, planetary system, and galaxy around her as she grows into it. Plus she has two dogs, who are thinly fictionalized versions of my dogs, and I love writing about them! SDR: I also love movie soundtracks for writing music—and also video game soundtracks! Book 3 of 6, Among Treacherous Stars , just came out on Tuesday.